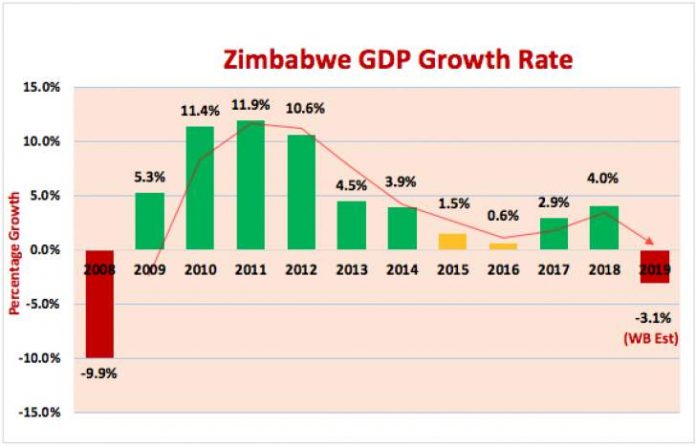 Zimbabwe’s foreign currency inflows in the first eight months of
the year have taken a big knock after gold and tobacco export earnings dropped 26 percent to US$1.05 billion from US$1.43 billion in the same period last year putting pressure on an already forex starved economy.

The development comes at a time when the country is facing serious economic meltdown, inflation, crippling fuel and forex shortages, dim-
ming the country’s prospects of recovery given export earnings’ slump in the third quarter of the year.

Economists say the subdued export earnings and increased imports will
plunge the country into an economic implosion, evoking the memories of
2008 where company closures were rampant in a hyper-inflationary envi-
ronment, industry capacity utilisation was below 20 percent.

Statistics obtained from the Reserve Bank of Zimbabwe show that this year’s month on month deliveries were down compared to last year due
to suspected smuggling, crippling fueland forex shortages and power outages.

“For the first eight months of the year up to August 2019, gold export
earnings were down 38 percent to US$674.4m from US$974.7m due
to power outages, forex shortages and an element of under-declaring from
(gold) companies,” reads part of the RBZ statement.

This is said to have created arbitrage opportunities in the yellow metal sector and this will have a negative impact to the already fragile economy as gold is the most liquid commodity in the world as countries earn their forex within a fortnight.

Mining experts believe that thedrop in gold exports was due to suspected smuggling due to lower forex retention threshold to small scale miners which contribute 64 percent of the gold earnings.

South African authorities estimate that over 40 tonnes of gold were
smuggled into their country. Some miners, especially large scale,
are believed to be selling their gold to suspected smugglers to get more forex for their operations.

Experts say established mining companies with huge capital cannot be dominated by less organised small scale producers who don’t have basic
machinery for mining. Zimbabwe is targeting 100 tonnes of gold per year by 2023, a figure which is expected to help the sector to earn US$12 billion yearly and only if forex retention threshold, fundamentals and funding issues are addressed.

Unlike gold, tobacco has broken yet another production record by
pushing last year’s record by almost 7million kilogrammes to reach 259.4m
kg.However, tobacco export earnings retreated 17 percent to US$375.6m
from US$453.7m due to subdued world prices caused by excess tobacco from last season and chaotic pronouncements by the central bank on tobacco forex retention.

“99.5 million kg of tobacco worth US$375.6m have been exported
to date, while 99.2m kg worth US$453.7m were exported during
the same period last year,” Tobacco Industry and Marketing Board chief
executive Andrew Matibiri said.

A number of tobacco farmers have a reduced appetite of growing the
gold leaf crop as 114 823 growers have registered for the 2019/20 season against 131 447 who registered during the same period last season.

This also comes at a time merchants are in a quandary to see if they can still contract farmers after close to 50 percent of the contracted farmers failed to repay loans. Merchants are failing to get fresh offshore credits to procure critical inputs and are now turning to local banks for funding.

Given the liquidity crunch and forex shortages in the market tobacco farming is expected to be difficult this forthcoming season, according to experts.

Tobacco has been the country’s saviour in terms of forex during March and September and its subdued production means the country will sink deeper into murky waters.