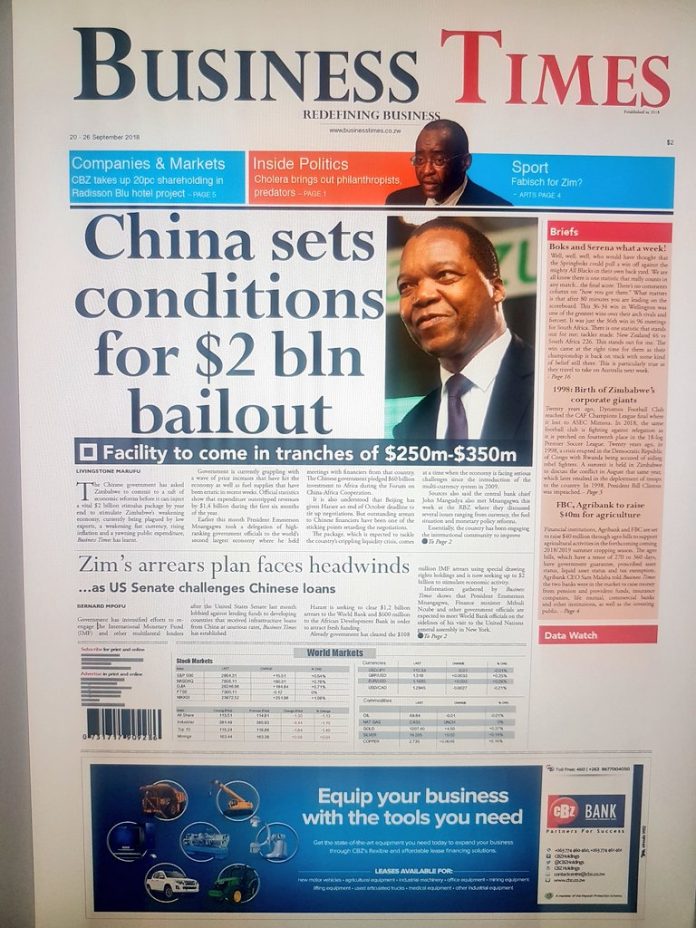 Zimbabwe’s debt-ridden government is in a dilemma after South Africa asked her northern neighbour to securitise mineral proceeds in exchange for a US$1,2 billion  (R17billion) bailout package, it has been established.

As first reported by Business Times in January, Zimbabwe, which is saddled with huge external debt, took its begging bowl to its southern neighbour last December seeking a financial package to jump-start the economy.

The new development comes after South Africa had earlier rejected Zimbabwe’s bailout saying it had no capacity to extend such a package in an election year. ANC leader Cyril Ramaphosa was voted into office last week. Negotiations then intensified and Pretoria is now considering assisting her neighbour.

Information gathered by this paper shows that South Africa, which had cited budgetary constraints, now wants Zimbabwe to use mineral resources as surety for the financial package. Zimbabwe has the second largest platinum reserves after South Africa and the country’s gold output has been on an upward trend in the last few years.

Diplomatic and government sources told Business Times this week that Zimbabwean authorities are in a dilemma whether to accept or reject the deal and are still weighing up options to make the next move. Zimbabwe is currently ineligible to access cheap concessionary funding from multilateral lenders due to its huge debt overhang.

“South African authorities already presented its paper to government and Reserve Bank of Zimbabwe that they are willing to give the country a US$1,2bn bailout package but are gravely concerned with country’s high defaulting rate hence tabled that they want to be paid in raw materials,” a source familiar with the developments said.

“South Africa wants platinum, lithium, gold and diamonds from Zimbabwe. They want Zimbabwean authorities to grant them the opportunity to mine in order to get the US$1,2bn loan. But Zimbabwean authorities don’t know what to do and are still considering the deal. Already, some ruling Zanu PF hardliners are  equating the deal to selling the country’s sovereignty in exchange for R17bn.”

South Africa’s Ambassador to Zimbabwe Mphakama Mbete told Business Times that negotiations are being held at the highest level.

“Discussions are underway but are being held at higher levels. Both parties between two nations were told not to discuss the delicate details of the meetings but great progress is being made. We are not aware of some of finer details of this sensitive issue as they are
being conveyed at a higher level…,” Mbete said.

Questions sent to South Africa Treasury spokesperson Jabulani Sikhakhane email had not been responded to at the time of going to print. Reserve Bank of Zimbabwe governor John Mangudya could also not be reached for comment.

South African International Relations Minister Lindiwe Sisulu recently said that SA government would grant the bailout “if it was affordable”.

Some South African pressure groups are demanding that Zimbabwe should adopt political and economic reforms before her neighbour can extend a bailout.

In the absence of affordable capital, Cairo-based regional lender African Export-Import Bank (Afreximbank) has been the go-to banker for government to ease liquidity problems triggered by unsustainable trade deficit and government expenditure.

South Africa, sources said, is also concerned with Zimbabwe’s surrogate currency , which now trading  at a 550 percent premium against the United States Dollars from 120 percent in September bringing back memories of yesteryear hyperinflation.

Recent price hikes saw annual inflation quickening to reaching 75,86 percent in April, the highest since the introduction of the multiple currency regime mainly dominated by the dollar, wiping out domestic savings. In March, annual inflation was 66,8 percent.

Last week, Ncube got the green light to get US$800m from private investors in SA to help the cash starved economy and struggling industry.

During the third session of the Bi-National Commission held in March, Zimbabwe and South Africa agreed to consider options for expanding the standing Facility arrangement between the respective central banks, according to a joint communique.

“Other financing options beyond this are also being explored (for example a facility from South African private banks to the Zimbabwe private sector and guaranteed by the South African Government, with an appropriate counter-guarantee from the Zimbabwe Government),” the communique said.

The two countries agreed to “work together on re-engagement with the international co-operating partners in support of Zimbabwe’s economic reform and Debt Arrears Clearance Agenda”.

Zim to export water to SA