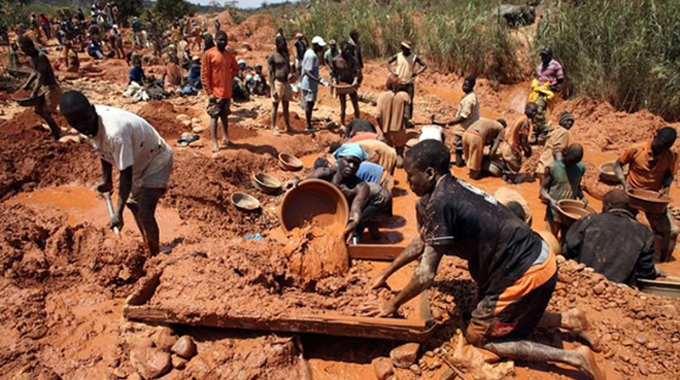 The menace caused by gangs of machete-wielding artisanal miners
infamously known as “MaShurugwi” took centre-stage at a high-level
government meeting amid concerns that the miners were terrorising
villagers, it has been learnt.

Artisanal mining was decriminalised a few years back as part of the government’s efforts to boost gold production. The yellow metal overtook tobacco as the country’s single largest foreign currency earner in 2018.
Information gathered by this paper shows that there are sharp disagreements within government on how to control the activities of the
miners who have been credited for boosting the gold output.

According to a well-placed source, “the Cabinet is divided over the
matter after the potential threat to national security by these thugs was
cited. One minister noted that these thugs only need someone to fund
them and they can turn into a militia overnight. The issue of MaShurugwi
or machete wars are highly associated with civil wars and these are the fears being raised by government officials now.”

It is also understood that state security agents have advised President
Emmerson Mnangagwa that the machete-wielding artisanal miners
who are terrorising gold mining towns around the country could soon become a state security threat.

Top spies, according to sources, have also advised President Mnangagwa to deal with the matter carefully. “The problem is that people only look at something as a political or security threat if it is targeting the President or deemed to potentially result in the overthrow of the government, but this is a huge threat which people don’t see,” said a source.

“These people are becoming too powerful and difficult to deal with
because they have machetes. Imagine if they start using guns. It’s going to be difficult for anyone to deal with them and this could become some sort of a militia that is difficult to contain,” added the source.

Business Times has learned that the Joint Operations Command – which
comprises senior officers from the military, police, intelligence service
and prisons – in Mashonaland Central province met recently to
discuss the matter.

Some police officers say they now fear for their lives as they
cannot enforce the law against these bandits without putting themselves
in danger. According to insiders, the Mashurugwis claim to be well
connected to top ministers and securocrats who guarantee their
immunity.

Zanu PF vehicles were last year stoned in the Shurugwi area by these
rowdy groups during the ruling party’s campaign trail. Zanu PF leadership in the Mashonalad Central province this month had a meeting with villagers in the Mazowe area and at Jumbo mine.

It was a meeting to address the security matters in the province. In attendance were the police and other members of the security sector. The villagers made the claims earlier when an inter-ministerial task force visited the province to assess the scourge of illegal mining. Police officers and Zanu PF officials also attended the meeting.

The gangs are said to be behind a series of crimes in Mazowe and some are already serving various jail sentences for killings in the machete gold wars. The ministerial task force visited the Eureka Mine, a defunct gold mine that President Mnangagwa visited before last year’s elections, promising to open it and create hundreds of jobs.

Remigious Matangira, MP for Bindura South, who also attended the meeting confirmed the problems of the Mashurungwi, but blamed it on the security forces for failing to bring order in the province.

Army spokesperson Overson Mugwisi said while it was a matter for all security departments, so far it remained a police issue where people
were being cut by knives. He said there was no need to deploy the army
so far.